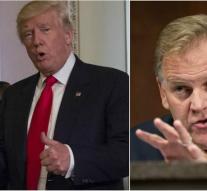 - The elected US president Donald Trump has contradicted on Twitter that turmoil and confusion arose in his team. Trump said that the composition of his government and advisory team claimed 'runs a very organized process.'

With his tweet Trump responded to reports in US media Tuesday and Wednesday that the rumbling in his squad preparing the presidency. Two people who dealt with national security are now no longer the team. Mike Rogers, who was named as a candidate for leading the CIA, stepped suddenly. Matthew Freedman also is gone from the team. According to the New York Times he was put on the side.

US media reported that Jared Kushner, son and adviser to Trump, is responsible for the setting aside of Freedman and Rogers.