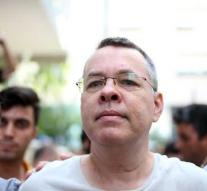 washington - US President Donald Trump does not cross the bridge with 'concessions' to secure the release of preacher Andrew Brunson. Trump told the Reuters news agency that he already thought he had a deal with Turkey, but it would not have been fulfilled.

Trump acknowledged that he had asked Israel to release a Turkish citizen. He believed that the Turkish president Erdogan would then let Brunson go, but that did not happen. 'I arranged for him to be released,' complained Trump. Ankara denied that an appointment had been made at the time about the release of Brunson.

The American president made it clear that the size is now full. 'I find it very sad what Turkey does. I think they make a big mistake. There are no concessions, 'he said. Trump said he expects Erdogan to 'let this very innocent and beautiful man and great father and Christian leave Turkey. '

The fate of Brunson is the deployment of a high-level diplomatic dispute between the NATO allies. Turkey says to preach the preacher of terrorist activities, but according to the US there is no evidence for this.