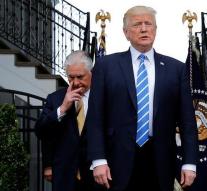 bedminster - US President Donald Trump announced Friday that he was taking military action as one of the options to address the political crisis in Venezuela.

Venezuela is not far away. The people suffer and die. We have many options for Venezuela, including a possible military option, if necessary, 'Trump said to journalists at his Bedminster holiday home.

He made his statement in the presence of Minister of Foreign Affairs, Rex Tillerson and the United States Ambassador to the United Nations, Nikki Haley.