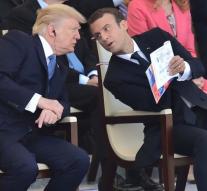 paris - French President Emmanuel Macron has been hopefully voted for US President Trump to withdraw his decision to withdraw from the Paris climate agreement. That writes the French newspaper Le Journal du Dimanche.

'Trump told me that he is looking for a solution in the coming months,' quotes Macron's daily newspaper. 'We discussed in detail what he could do for his decision.'

On Thursday, Trump said in a press conference that something could still happen around the Paris climate treaty. He seemed to suggest that he could change his mind.