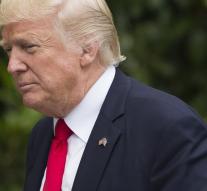 washington - Donald Trump has partly disclosed his finances over the year 2016. His assets amounted to over $ 1 billion. On the other hand, more than $ 300 million were debts, of which over $ 100 million at Deutsche Bank and roughly the same amount at Ladder Capital Finance, a real estate fund in New York.

The president submitted the financial statement on June 14 to the Office for Government Ethics, an independent federal executive service that must combat conflict of interests. The overview is interesting because Trump has still not disclosed his tax return, unlike usual for presidents and presidential candidates.

The overview shows that Trump waved the scepter over an empire of 565 separate companies. He led the day before his appointment or earlier transfer, to his son, Donald.

It is also clear that Trump has earned nearly $ 20 million with the newly opened Trump-Hotel in Washington. The turnover of his property in Mar-a-Lago, Florida doubled in a period of fifteen months to $ 37 million.