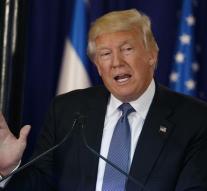 washington - President Donald Trump postponed the move of the US embassy in Israel by half a year. He signed a decree on Thursday. During his election campaign, Trump promised to move the embassy from Tel Aviv to Jerusalem. He wants to keep that promise, but does not capture a timetable.

The White House announced that the provisional postponement is intended to maximize the chances of peace negotiations between Israel and the Palestinians, which dreams of their own autonomous state. 'Both parties consider Jerusalem as their capital. The Palestinians claim the eastern part, the Israeli whole city.

The US Congress already adopted a law in 1995 that regulated the embassy movement, but since then all presidents have put the execution every six months in order not to endanger national security.