Home / World / Trump: It's an honor to meet Putin 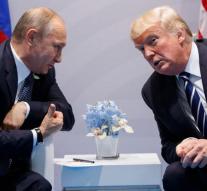 hamburg - US President Donald Trump called 'honor' on Friday to meet his Russian colleague Vladimir Putin. 'We have discussed several issues. I think it's going to be very good, 'Trump told reporters while sitting at the G20 in Hamburg next to the Russian leader.

Putin also rejoiced at his official meeting with Trump. 'It's great to meet you personally,' said the Russian president via a translator. The leaders talked to each other earlier in the day. Video shows show how the men shook hands.