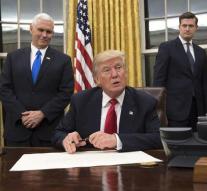 washington - President Donald Trump on Friday (local time) signed his first two Presidential Decrees. Trump did so shortly after he had taken in Washington the parade in honor of his inauguration to 45th US president.

One decree aims in part to eliminate the regulation of Obamacare. The other calls to temporarily freeze federal authorities on all new regulations.

During his campaign as Republican presidential candidate Donald Trump had frequent criticism of Obamacare, the health care system of his predecessor, Barack Obama. The new president and the Republican majority want rid of it in Congress. Should there be no substitute for Obamacare, then walk twenty million Americans at risk of losing their health insurance.

The hastily welded sign ceremony Trump also spoke briefly with reporters about his day: 'It was busy, but good. It was a beautiful day. 'The scene of the action, the Oval Office, was decorated differently than President Obama. Thus, the crimson curtains are replaced with gold-colored specimens. One moment there was the bust of Martin Luther King was exchanged for a picture of Winston Churchill. Which was later with a photo by the White House invalidated.

Police in Washington reported that arrested more than 200 protesters in riots that took place in various places in the city during the inauguration. The detainees would have thrown bottles and stones at officers. who responded with pepper spray among others. Saturday is expected in larger protests, including a 'woman march 'which is expected to 200 000 women will participate.

At the conclusion of the festivities surrounding his inauguration does Trump Friday to three balls.

Read all of our dossier on the Donald Trump inauguration.