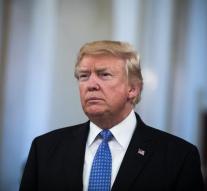 washington - President Donald Trump of the United States is 'very disappointed' in China. In a series of tweets, he said on Sunday night that the Chinese 'do nothing for us with North Korea except talking', while earning billions of dollars every year on trade with the US.

China can easily solve the problem with North Korea according to Trump. 'We will no longer allow this to happen,' said the US president in one of his tweets. He did not call any concrete measures against China.

China recalled an earlier call to withdraw US anti-missile systems from South Korea, after North Korea reported to have again conducted a successful test with missiles that could reach the whole of the United States.