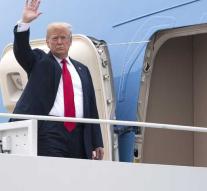 On Wednesday, a delegation arrived with a senior North Korean official in New York to discuss the possible meeting between Trump and Kim next month. According to Trump, these talks are progressing well and the delegation will send him a letter from Kim on Friday.

'I look forward to seeing what is in the letter,' said Trump at Andrews Air Force Base. In the past few days, the White House has raised expectations that the meeting between Trump and Kim will continue on June 12 in Singapore. Trump looked at it earlier.