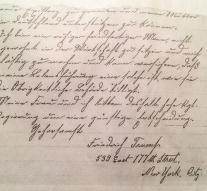 speyer - Donald Trump's grandfather Friedrich (1869-1918), a wealthy emigrant, the southern German authorities begged a hundred years ago to be allowed to return. But they did not respond. The deportation order of Germany has now been discovered.

German genealogist Roland Paul removal order found in an archive in Speyer. Three months after Friedrich Trump with his wife Elizabeth on July 1, 1905 with the steamship Pennsylvania from Hamburg to the US left, the father of the future president was born in New York.

Friedrich Trump emigrated with his parents in 1885 to the US However, he wanted to return to his hometown Kallstadt in the Rhineland-Palatinate and went there. To real integration again 'it was not; he was instructed by the authorities to leave the country. The Ministry of War in Munich felt that Trump 'illegally had left Germany. In 1890 he received the American nationality. Therefore deprived the Germans him his citizenship angrily in 1905.

Earlier this month, told historian Reinhard Hofer, specializing in the origin of Americans, to The Associated Press that he found a begging letter from Friedrich Trump in the archives of Speyer. 'In 1906, on December 20, Friedrich Trump wrote a begging letter to the venerable royal government. He asked to be allowed to return to his beloved Bavaria. '

Friedrich wife Elizabeth Trump, went overseas namely devastated the homesickness. He was a year ago in their hometown Kallstadt in the Pfalz, which then belonged to Bavaria, married her.