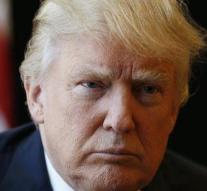 jerusalem - US President Donald Trump said Monday that Iran should immediately stop its financial and military support to 'terrorists and militias'. He also repeated that the country may never possess nuclear weapons. Trump made his comments during a meeting in Jerusalem with Israeli President Reuven Rivlin.

'It is important for the United States and Israel to declare with one voice that Iran should never have a nuclear weapon and that it must stop its deadly funding, training and equipment from terrorists and militias immediately,' said Trump.

The United States marks Iran as a 'state sponsor of terrorism'. According to the US, Tehran's support for the civil war of Syrian President Bashar al-Assad, the Houthi rebels in Yemen's civil war and the militias of Shi'ish Hizbullah in Lebanon has forced the destabilization of the Middle East.