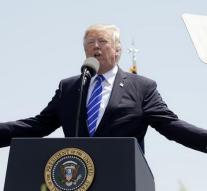 - 'Life is not fair.' That message wanted Donald Trump to submit to a group of cadets from the US Coast Guard on Wednesday. The speech given by the US President then became quite personal.

'You will notice in life that many things are not fair. Some things that happen you have not earned, 'said Trump, who advises the cadets to always fight for what you believe in.

The speech for graduated cadets became personal when Trump began about how unfair life is for him. 'Just look at how I've been treated lately,' he began. 'Especially through the media. No politician ever- and I'm sure I know- treated as badly or unfairly as I do. But you should not let them get you small. '

'Get rid of', Trump advises the cadets in case they are treated unfairly. 'And fight, fight, fight. '

Trump makes the statements after a messy week. American media reported that Trump would have shared secret information with senior Russian officials. And The New York Times wrote Tuesday that Trump has requested the investigation of former National Security Advisor Michael Flynn. This is based on a memo of the newly dismissed director of the FBI, James Comey.