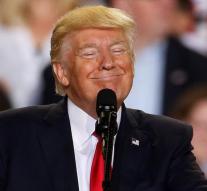 harrisburg - US President Donald Trump has once again taken a great deal to the media during a big event on his hundredth day as president. Channels like CNN and MSNBC are 'fake news,' said Trump Saturday night in Harrisburg. He reprimanded the journalists that he deliberately misunderstood him.

The president also took note of the Correspondents' Diner. At the annual gala dinner of the parliamentary press in Washington, it is common for the seated president to give a humorous performance. However, Trump declined. It's the first time in more than thirty years that a president is not present at dinner. According to Trump, it would be especially boring at dinner.