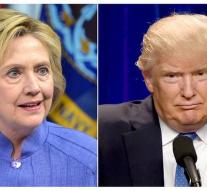 - Donald Trump gets in the polls behind Hillary Clinton. The Republican candidate for the US presidential election currently stabbing remains at 39 percent, while the Clinton Democrats can count on 51 percent of the vote, according to a major survey of the influential newspaper The Washington Post.

That outcome is quite different from the polls a month ago, when Trump still 46 and Clinton 44 percent of the electorate had behind him. Asked why, they find two of the three respondents Trump unsuitable to lead the United States.

A second poll by The Wall Street Journal and broadcaster ABC also indicates loss of Trump. Clinton defeats Trump here by 46 to 41 percent.