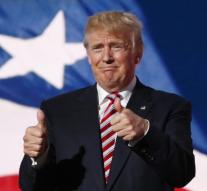 - Donald Trump is if he wins the presidential election is not going to just shoot to help his NATO partners when they are attacked. That made the Republican presidential candidate Thursday clear in an interview with the New York Times. First, he will then see what the country really has done for America.

Trump is willing to continue existing agreements but only in accordance with its motto 'America First' as allies cease to benefit from the,, era of American generosity that is not to pay more. '

The real estate mogul said that he does not intend to exert pressure on Turkey or other authoritarian allies carrying out purges or restrict civil liberties. The United States should, according to him,, first have to clean up their own mess' before trying to change the behavior of other countries.,, I do not think we have the right to lecture others. Look what is happening in our country. How can we stand out a sermon as people here policemen shoot in cold blood. ''