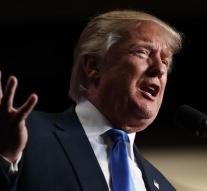 - Donald Trump, Patricia Smith, the mother of a victim of an attack on the US consulate in Libya's Benghazi, invited to the debate that he performs Wednesday night against Hillary Clinton. The woman told Yahoo News that they probably accept the invitation.

Patricia Smith is the mother of an employee of the US State Department, Sean Smith. He worked at the US consulate in the Libyan city of Benghazi when it was the target in 2012 of an attack. Sean Smith and three other Americans, including the ambassador, were killed.

Smith criticizes Clinton among other things that she is responsible as the then Minister of Foreign Affairs for the attack. The ministry would be multiple requests for improved security for the embassy have been ignored.

The debate Trump and Clinton Wednesday in Las Vegas is the third and last in the run-up to the presidential elections on 8 November.