Home / World / Trump has a tip for Spain: build a wall in the Sahara 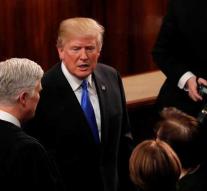 madrid - US President Donald Trump has suggested stopping migrants by building a wall in the Sahara. This was told by the Spanish minister Josep Borrell (Foreign Affairs), who immediately made it clear that he was not enthusiastic about the proposal. The desert has a length of thousands of kilometers.

Borrell spoke at a lunch this week against closing ports for boats with migrants. That would not be the way to try to solve migration. 'And building a wall in the Sahara, as President Trump recently advised me, is not,' said the Spanish minister.

When Borrell Trump explained that the Sahara stretching thousands of kilometers, the US president announced that the 'Sahara limit can not exceed the border with Mexico,' writes The Guardian.

The American embassy in Madrid has not yet responded to Trump's alleged advice. The Spanish Government confirms that the advice is given, but does not want to comment on the substance. The plan is, however, practically impossible, apart from the size of the Sahara; the country has only two enclaves in Africa and should therefore construct the wall on other people's territory.

The US president also tries to slow down illegal migration with a border wall in his own country. He builds that barrier at the border with Mexico, and had also made a spearhead of this during the campaign for the presidential election.