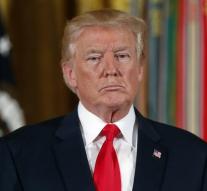 caracas - US President Trump keeps his Venezuelan colleague Nicolas Maduro 'personally responsible' for the safety and health of the two opposition leaders arrested on Tuesday. That has signaled the White House in a statement. Trump calls López and Ledezma political prisoners.

The two politicians, Leopoldo López and Antonia Ledezma, were taken from their house and taken to prison. According to the supreme court of the South American country, the politicians who had house arrest wanted to flee.

Maduro won a controversial election for the constitution of a constitutional assembly on Sunday, giving him much more power. López and Ledezma have been opposed to other opponents like that.