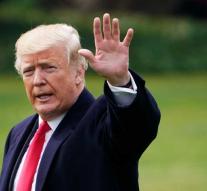 amsterdam (dft) - The US president Donald Trump has Monday hard taken to former Starbucks CEO Howard Schultz. The coffee billionaire is considering participating in the American...

But according to Trump, Schultz does not have the guts at all. 'And I agree with him that he is not the smartest person,' the president writes on Twitter. He adds that Starbucks will hopefully continue to pay him for the establishment of the coffee chain in the Trump Tower in New York.

Schultz, in his turn, has previously indicated that Trump is unfit to be the president of the United States.