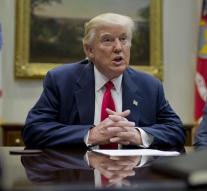 washington - The US president Donald Trump on Tuesday via Twitter his predecessor, Barack Obama blamed a policy measure that George W. Bush took. '122 dangerous prisoners, released by the Obama administration from Gitmo have returned to the battlefield. Another terrible decision, 'fulminated Trump.

He relied on data from the National Intelligence DNI which 122 of the 693 suspects on suspicion of terrorism detained in the prison camp Guantanamo ('Gitmo') after they were released offenders appeared and continued with their old practices.

The Ministry of Defence had announced Monday that a man was slain by an airstrike in Yemen who was locked in the past in the US prison in Cuba.

In the 'Miami Herald' Gitmo-specialist Carol Rosenberg responded immediately by revealing that Obama has had only nine arrested jihadists go another 113 owed their freedom to Bush.