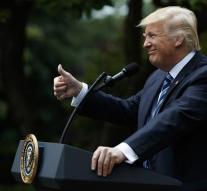 washington - US President Donald Trump signed a decree on religious liberties on Thursday. That gives churches and other non-taxable institutions some space for political activities. That was forbidden by the separation of church and state. The presidential decree also weakens the rules for employers who are on a belief basis against childbirth.

However, provisions that allow government agencies and companies to refuse services to homosexuals by virtue of freedom of religion are lacking. Civil rights organizations and the gay movement were afraid of it. However, the American Civil Liberties Union (ACLU), which stands for the freedoms and rights of US citizens, nevertheless wished to challenge the Trump ruling by the court.