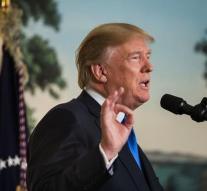 jerusalem - American allies in the Middle East scaled themselves behind the Iran strategy of US President Donald Trump on Friday. Saudi Arabia and Israel, who themselves have a tense relationship with Tehran, praise the hard course of Trump.

Israeli Prime Minister Benjamin Netanyahu congratulated Trump on his speech. 'He couragefully confronted the terrorist Iranian regime and created an opportunity to repair this bad deal, reduce Iranian aggression and address the criminal support of terrorism. '