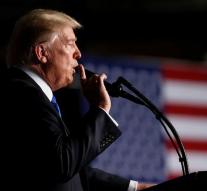 washington - President Donald Trump wants to send extra soldiers to Afghanistan, so he told in a televised speech on Monday (local time). His new approach is to prevent Afghanistan from becoming a detention center for Islamic terrorists.

During his election campaign, he repeatedly stated that the war in Afghanistan costs too much money and lives. Trump did not let out how many additional soldiers it is, but according to Defense Secretary James Mattis, 4000 extra soldiers are on top of the 8400 Afghanistan-based troops.

The United States has been active in Afghanistan since October 2001, which is the longest military conflict in which the country is involved.