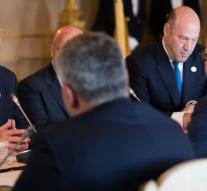 brussels - Donald Trump had a 'message of enthusiasm' for Belgium on Wednesday. That said Belgian Prime Minister Charles Michel after a 'warm and respectful' meeting of over an hour with the American president in the royal palace in Brussels.

Trump named the Belgian capital last year as a 'hell hole', when he had not yet been elected president. 'Now there's the President Donald Trump,' said Michel. 'Today I received compliments especially. '

However, he realized that Belgium should spend more money on defense. Michel, in turn, made it clear that NATO is not an outdated organization, as Trump said earlier. 'There is a will to hold a strong shaft between Europe and the US,' the premier concluded. 'We will see in the coming years. '