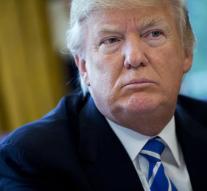 washington - President Donald Trump does not stop a 'preventive war' to put an end to the North Korean threat with a nuclear weapon. That's what his national security advisor Herbert McMaster said in an interview with MSNBC. That was broadcast just before the UN Security Council met for a resolution to boost economic and political pressure on Pyongyang.

'If they have nuclear weapons that can threaten the United States, that is unfortunate in the eyes of the president. So, we must take all possible steps to stop them, including a military option, 'said McMaster. Trump has been completely clear about it. However, the US prefers to deviate the threat in a different way than by 'a war at the expense of much suffering for the people of South Korea in particular. ''