Home / World / Trump 'did not know conversation son with Russin' 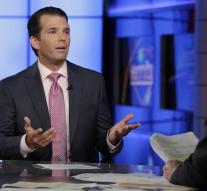 washington - US President Donald Trump said Wednesday night (local time) that he did not deny the controversial encounter of his son Donald Jr. last year with a Russian jurist.

The Russians promised Trump sensitive information about Trumps opponent Hillary Clinton during the campaign for presidential elections. Trump Jr. published the email exchange with an intermediary prior to the meeting on Tuesday. This shows that he knew that the information came from the Russian government, who would like to support his father.