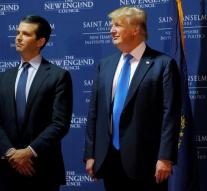 washington - US President Donald Trump has personally formulated the statement used his eldest son Donald Jr. as an excuse for his encounter with a Russian advocate. Therein he said that the talk was about a program for adoption of Russian children. That turned out not to be true later.

Trump Jr. came with his statement under pressure from another newspaper, The New York Times. Who came up with a message about the meeting with the Russian advocate and Trump wanted that news.