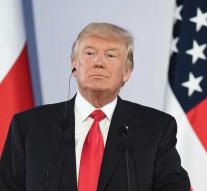 warschau - US President Donald Trump has said in Warsaw that his country is taking resolute steps against the North Korean threat.

Trump responded to a trial of the Stalinist-ruled North Korea with an intercontinental ballistic missile. The North Korean dictator Kim Jong-un is proud that his country claims to be able to fight the US with nuclear weapons.

The US president did not decide what steps he would take. 'Something has to be done to North Korea and we'll look into the coming weeks and months what's happening. ''

Trump started in Europe on Thursday in three days of international consultation. He goes to Hamburg later in the day. There is the summit of the economic overlay group G20. Beforehand, he speaks with Merkel in Chambers of Chancellor, and talks with the South Korean President Moon Jae-in and Japanese Prime Minister Shinzo Abe about North Korea.