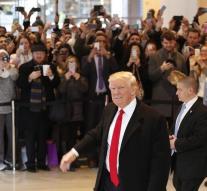 Withdrawal of the United States from climate pact, signed by nearly 200 countries, would be a major setback for international efforts to combat rising temperatures and the extinction of animals and plants. But heat waves, floods and rising sea levels must be limited by the treaty.

Trump seems to steer his election rhetoric considerably. Climate change, he found a few months ago, 'a hoax', but in an interview in the New York Times he says now that he suspects that humans cause global warming.