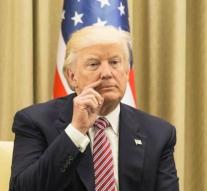 jerusalem - Donald Trump said in his own words Israel 'never mentioned' during a discussion with, amongst others, Russian Foreign Minister Sergej Lavrov in the White House. The US president shared secret information about new terrorist threats with his interlocutors. He had gotten from an ally.

The loosening came to Trump to be highly criticized because he possibly endangered sources of a foreign intelligence service. The media in the US reported that Israeli Trump had been informed of possible attacks on aircraft using explosives in laptops.

'I never spoke the word or the name of Israel, not once during that interview,' Trump said on press questions on Monday before meeting Benjamin Netanyahu in Jerusalem.