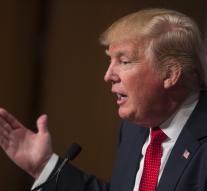 - US presidential candidate Donald Trump insists on his controversial plan to ban Muslims from the United States. He defended the proposal in American media by comparing themselves with war President Franklin D. Roosevelt.

" What I do is no different than what FDR did ", said the real estate magnate in a morning program on ABC. Roosevelt did during the Second World War, many thousands of Americans of Japanese ancestry interned in camps. That happened after the Japanese attack on Pearl Harbor.

The 69-year-old billionaire Trump received Monday a storm of criticism over him when he asked Muslims not wanting to allow more to the US According to the White House made ​​the remark to him totally unfit for the presidency.

Trump thinks himself clearly otherwise. " We have no choice ", said the Republican. " There are people who want to destroy our buildings and cities. We need to figure out what is going on. "