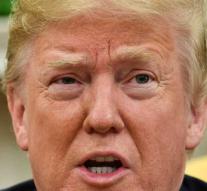 washington - Pat Cipollone becomes the new legal adviser to the White House. He succeeds Donald McGahn, who will soon depart from the White House. This was confirmed by US President Donald Trump in an interview with news agency AP.

Cipollone is now a partner of a law firm that has a good name in Washington through lawsuits relating to government institutions, including in the areas of healthcare, commerce and trade arrangements.

The departure of McGahn was already known. He was previously a legal advisor to the Trump campaign team and got a job in the White House after the election. There the lawyer was not always in line with the president. McGahn threatened to resign, according to The New York Times, when Trump wanted to dismiss special prosecutor Robert Mueller last year. Trump finally scribbled back, insiders said to the newspaper.