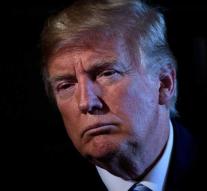 washington - On the eve of the commemoration of the victims of the violence at a meeting of legal nationalists in Charlottesville, Donald Trump took a different tone. 'The riots a year ago led to senseless death and division. We must come together as a nation. I condemn all forms of racism and violence. Peace for ALL Americans, 'said Saturday's presidential tweet.

Trump chased many, including Republican party members, into the armor last year by arguing that both parties were to blame for the rallying of alt-right groups in Charlottesville so out of hand. A right-wing extremist drove his car into a group of counter-demonstrators. As a result, a woman died and 35 people were injured. The perpetrator has been charged with murder. His process begins in November.