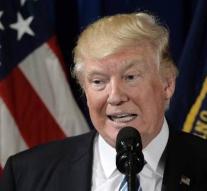 washington - US President Donald Trump went to Saudi Arabia on Thursday. 'They did not treat us fairly, because defending Saudi Arabia cost us enormous amounts.'

That said the president in an interview with Reuters. Saudi Arabia acts as a major ally of the United States and a regular customer of the US defense industry. Riyadh has spent tens of billions of dollars on American weapons and other military equipment in recent years.

Nevertheless, Trump complained already during his campaign for the presidency about the establishment of Riyadh, which in his eyes benefited cheaply from US protection. 'Nobody is going to quarrel with Saudi Arabia because we keep an eye on it,' he said in a speech last year. 'They do not pay us a fair price. '

Trump also targets his arrows not only in Saudi Arabia. He also told Reuters that South Korea has to pay off to the THAAD anti-missile system that is currently being built in that country as a defense against possible attacks from North Korea.