Home / World / Trump: China will adhere to the rules 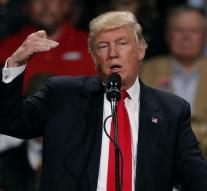 - Donald Trump is confident that US relations with China will improve under its new ambassador. Terry Branstad, are candidates for the post, knows the country and know how to reach goals, said the future president Thursday evening (local time) during a speech in Des Moines. Trump took Branstad, who was governor in the state of Iowa, Thursday briefly on stage.

Trump during the speech stressed once again that the relationship between the two countries is difficult because China to behave dishonestly. 'China is not a market economy. It is time that they abide by the rules and they will abide by the rules. '

During his campaign, Republican presidential candidate had the necessary criticism of Beijing. Last week, Trump made matters worse because he had a telephone conversation with the President of Taiwan. Located in Beijing particularly sensitive because the island state is considered part of the PRC.

'China is responsible for almost half of the trade deficit of the US,' said Trump in Des Moines. 'I know that China was competitive and did business with people who have nothing figured out. But we will benefit with mutual respect of each other and Terry will make. '

China has reacted positively to the news about the nomination for Branstad, called an 'old friend' of the Chinese people by the Chinese. The Chinese news agency Xinhua said on Wednesday that the appointment of the governor, who has led six trade missions to China, is a positive step towards a healthy and stable relationship with China.