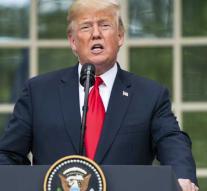 washington (anp/rtr) - China wants to conclude a trade deal with the United States, which may make it possible to abandon further US import duties on Chinese goods. That's what President Donald Trump said.

Trump said that China has drawn up a fairly complete list of trade proposals, although it is not yet complete. Trump will meet with Chinese president Xi Jinping later this month at the G20 meeting in Argentina. Trump had already said before that he would like to come to a trade agreement with the Chinese.