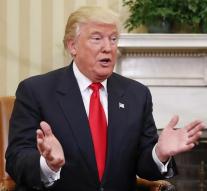 - The Municipality of New York asking the US government for $ 35 million (over 32 million) for the security of the Trump Tower in the city. President-elect Donald Trump spends much time in the skyscraper in Manhattan, with high security costs as a result.

Heavily armed officers guard since July on the corporate headquarters of Trump. When it became clear that he would participate on behalf of the Republican Party in the presidential elections. After the Republican had won the election, the local police took additional security measures. Similarly keep plainclothes agents an eye.

Mayor Bill de Blasio expected to own say that the federal government comes through with the requested millions. The city would have been already a remuneration for comparable operations.

The city wants compensation for the period between November 8 and January 20, and Trump is installed as president. Also, there should be a mechanism for the protection of the property during the reign of the Republican.