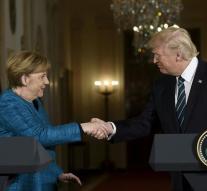 washington - According to the White House, nothing is wrong with the understanding between US President Donald Trump and German Chancellor Angela Merkel. 'They can go well together,' spokesman Sean Spicer told Tuesday.

Trump has a lot of respect for her. 'And he not only considers Germany but also the rest of Europe as a major American ally. '

Spicer gave a short press conference after Trump had been reluctant to learn from German trade and spending policy earlier on Twitter: 'That is very bad for the US and this will change. '