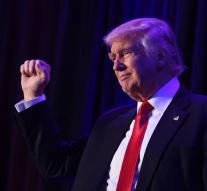 - The new US president Donald Trump called in his victory speech for unity in the United States. 'We need to heal the wounds after this campaign, between Republicans and Democrats. We should again be one people, we have to reconcile ourselves. I want to be the president of all Americans.'

'I'm sorry I let you wait. I just had a call from Hillary Clinton, they congratulated us on our victory,' Trump began his speech. 'I congratulated her on her good campaign. She has worked for a long time very hard, we need her to be grateful for what she has done for our country. '

Trump spoke, unlike during the campaign, particularly subdued. 'Anyone who did not support me, I want your help, I want your support, together. Our campaign was a movement of millions of men and women who wanted a better country and who wanted a better life. Our government will be for everyone. We will rebuild our country and the American Dream revitalize. No American will be forgotten. We go our bridges, roads, rebuild hospitals. Millions of people go to work to rebuild our country. We have double good economic plan, economic growth. We work with anyone who wants to work with us. No dream is too big, no future unreachable. America wants nothing but the best. We need to dream big dreams, beautiful and successful things. We want fair treatment of all nations and other countries. '