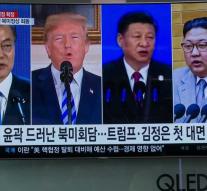 seoul - South Korean President Moon Jae-in and US President Donald Trump conducted telephone discussions on Sunday to ensure that the forthcoming summit between North Korea and the US continues. North Korea threatened to withdraw from, among other things, dissatisfaction with US military exercises with South Korea.

Moon and Trump talked for about twenty minutes and exchanged thoughts about North Korea's recent response, according to the presidential office of South Korea without going further into the matter.

Moon and Trump meet Tuesday in Washington, a few weeks before the summit meeting of North Korean leader Kim Jong-un with Trump on June 12 in Singapore.

Although a historic inter-Korean summit gave hope for reconciliation at the end of April, North Korea has shown a change in tone in recent days. Pyongyang interferes with the American military maneuvers with South Korea. North Korea sees that as a provocation. The US claim that the military exercises are purely defensive in nature.

North Korea also said that the country has no interest in a summit meeting with the US when it comes to the 'one-sided' requirement that the Pyongyang regime give up its nuclear weapons arsenal.