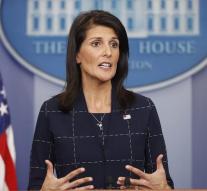 washington - US President Donald Trump believes, according to UN ambassador Nikki Haley, that climate is changing and that air pollution also plays a role. He also realizes that the United States must take responsibility, 'and we will do that,' Haley said to CNN.

Trump dismissed climate change in the past as a 'versinsel' and 'myth. 'However, after his official appointment in January he remained on the plain. Even when he announced last Thursday that the US would withdraw from the climate treaty of Paris, he did not decide whether he believes in climate change or not. At questions from journalists, high-ranking government representatives answered evasively.

READ ALSO: US draws out of climate agreement

CNN broadcasts the interview with Haley on Sunday, but sat on its website on Saturday.