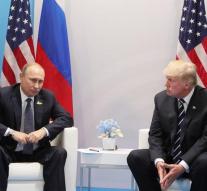 washington - US President Donald Trump assumes that Russia has mixed in the elections. US UN ambassador Nikki Haley said in an interview with CNN on Saturday that 'everyone knows that Russia is behind' and so is Trump.

Haley is being asked for the meeting between Trump and Russian President Vladimir Putin during the G20 summit in Hamburg. In that conversation, Trump immediately cut the sensitive subject. According to Haley to clarify to Putin: 'Yes, we know that you have interfered with our elections. ''

Trump never spoke clearly about the matter. Even after meeting with Putin, who denied everything, it remained unclear whether Trump criticizes the Russians. According to Putin, his American ambassador would have laid down his answers.

'Everybody tries to mosquitoes about what he says and what not, but talking is one thing, deeds are another,' explains Haley. Trump has confronted Putin and, according to her, it is awaiting how it evolves.