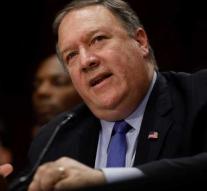 washington - Donald Trump has asked foreign minister Mike Pompeo on Friday on Twitter to abandon his planned trip to North Korea. The US president thinks that this is not opportune at the moment because he feels that Washington is not making enough progress in clearing the nuclear weapons arsenal on the Korean peninsula.

'Moreover, because of our much more rigid position in trade with China, I do not believe that they contribute to the denuclearization process, as was previously the case. Minister Pompeo looks forward to going to North Korea in the near future, most likely after our trade relationship with China has changed. In the meantime, I would like to extend my sincere greetings to President Kim and express my respect. I hope to meet him soon. '

Pompeo would fly to Pyongyang next week in the company of Steve Biegun, the new ambassador for North Korea.