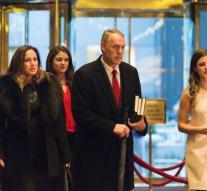 washington - A former Marine who is a strong supporter of coal extraction Interior Minister under Donald Trump. His team confirmed Thursday trumps choice for Ryan Zinke (55). The Senate must decide whether he is actually appointed.

Zinke was a commander in the Navy SEALs, an elite unit. Then he switched to politics and was elected as Delegate for his state of Montana. He was in favor of mining on federal land. Within the Republican Party that is a discussion point: there are too many to poke Congressmen to sell large tracts of land that are still owned by the state. As minister, he later goes on the management of federal lands, including national parks.

About Russian President Putin Zinke said recently that 'without doubt is a more effective leader than Obama. 'As examples of Putin's success Zinke said the annexation of Crimea, the increase of Russian influence in Ukraine and planting a flag on the North Pole.