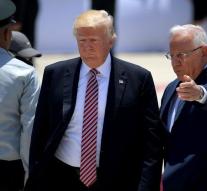 jerusalem - US President Donald Trump has arrived in Israel. The Presidential Air Force One landed Monday at Ben-Gurion Airport in Tel Aviv. It is known for the first direct flight in the history of the Saudi capital Riyadh to Israel.

Trump has spent the last two days in Saudi Arabia. He is going to talk to Israel with Prime Minister Benjamin Netanyahu. A visit to Palestinian President Mahmoud Abbas is also on the agenda. Trump hopes to revive the peace talks.

The first foreign travel of the US President takes a total of nine days. Trump travels to Europe, where he visits Belgium, Italy and the Vatican City. There he is received Wednesday by Pope Franciscus.