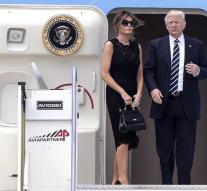 brussels - Donald Trump and his entourage arrived in Brussels on Wednesday afternoon. The Air Force One landed at the national airport at Brussels around 16:00. Prior to his trip to the city with the armored vehicle 'The Beast', important traffic routes have been closed. The police are in attendance.

Trump is received by King Filip in the royal palace in the center. Then he has a working relationship with Belgian Prime Minister Charles Michel. The president allegedly spent the night at the extra-protected US Embassy in the city, which he previously described as a 'hell hole'. His wife Melania lives in the nearby 'The Hotel'.

Thursday evening, after meeting with leaders of the European institutions and the NATO summit of Heads of Government and Heads of State, Trump flies to Sicily for a G7 meeting.