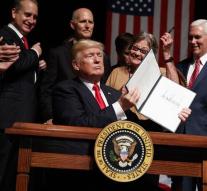 miami - President Donald Trump rejected the advancement policy of his predecessor Barack Obama against Cuba on Friday. He signed a decree making the individual Americans difficult to travel as a tourist to the Caribbean island and to spend money that, according to him, holds the communist regime in the saddle. Trump also decided restrictive measures for businessmen with the Cuban army.

Family visits or participation in cultural, religious and scientific exchanges may be possible as well as group trips. US airlines flying on Cuba and cruise ships who are in possession may continue to do so.

'With God's help, we quickly get a free Cuba,' said Trump during a speech to the Cuban community in Miami in the state of Florida. The White House is partially reversing Obama's policy from 2014, the door is not closing. The ambassador is not retrieved from Havana and the import rules for Cuban rum and cigars remain flexible.