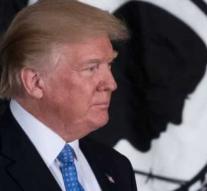 washington - President Donald Trump has announced the winners of his own 'Fake News Awards'. On the website of the Republican party he announced that among others The New York Times, the Washington Post, ABC News and CNN were winners of the 'long awaited 2017 fake news awards'.

The president sent a tweet in the course of the evening with the link to the website with the 'winners'. However, the website was immediately unreachable.

In the list, Trump names journalists and their articles by name, such as Paul Krugman of The New York Times. According to the president, he said that the markets would never recover after Trump's victory.