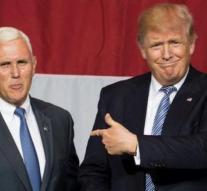 - Republicans Donald Trump and Mike Pence have already spoken to 29 leaders in the world, including Saudi King Salman, Mexican President Enrique Peña Nieto and the Indian Prime Minister Narendra Modi. The employees reported Trump to January 20, the new US president.

Trump also called the Danish Prime Minister Lars Lokke Rasmussen. Rasmussen showed Wednesday that he had spoken with Trump. He promised that Denmark will spend more on defense.

One of the grievances of Trump on US foreign policy that Washington is a lot of money is spent on actions in the international arena, while NATO allies very economical to do. The NATO recommends members to at least 2 percent of gross domestic product spending on defense, but not usually reached an average of more than 1.4 percent of GDP.

Denmark now stands at 1.2 percent. This percentage is higher than the Dutch which is around 1.14 percent. Prime Minister Mark Rutte had Trump Monday on the line to congratulate the incoming President on his election victory

Trump is November 8 elected US president. Pence is its vice president.